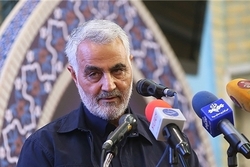 RNA - In a written statement, the foreign ministry announced that it was deeply concerned by the rising tensions between the United States and Iran, and that turning Iraq into an area of conflict will harm peace and stability in the region.

The top commander was martyred in a targeted assassination attack by US aircraft at Baghdad International Airport early Friday morning. The airstrike also martyred Abu Mahdi al-Muhandis, deputy commander of Iraq's Popular Mobilization Forces (PMF), or Hashad al-Shabi. The PMF media arm reported that the two were martyred in an American airstrike that targeted their vehicle on the road to the airport.

The attack came amid tensions that started by the US attack on PMF units that killed 28 Iraqi popular forces. A day later, Iraqi people attacked the US embassy in Baghdad. On Wednesday Trump ordered about 750 US soldiers deployed to the Middle East.