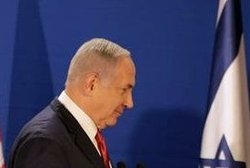 Israeli Prime Minister Benjamin Netanyahu says he would approach the regime's parliament in order to seek immunity from corruption charges, in a move that could considerably delay criminal proceedings against him.

RNA - “… I intend to approach the speaker of the Knesset in accordance with chapter 4C of the law, in order to fulfill my right, my duty and my mission to continue to serve you for the future of Israel," the Israeli prime minister said during a speech in Jerusalem al-Quds on Wednesday.

Netanyahu, who has been charged with bribery, fraud and breach of trust following his indictment in November, dismissed the charges against him as “fabricated tales”.

"It's my intention to stand before the court to shatter all the fabricated accusations against me," Netanyahu claimed.

"The immunity law is meant to protect elected officials from tailored lawsuits, from serving political cases whose aim is to harm the will of the people," he added.

"According to the law, immunity is always temporary. It is cancelled with the end of the term of the Knesset that granted it," he said.

If the Knesset House Committee approves Netanyahu's request it will be passed on to the legislature's plenum for a vote.

However, the initial deliberation is expected to be delayed for several months since a House Committee has not been appointed following April's general election.

The courts are reportedly not permitted to take on the indictment against Netanyahu until the committee has reached a decision.

Netanyahu’s request needs to be discussed by a parliamentary committee that will be likely assembled after the upcoming March election, Israel’s third in a year.

The 2020 votes are to be held in the shadow of the corruption indictment handed down against Netanyahu in November 2019.

Back then, Israel’s attorney general indicted Netanyahu for “receiving a bribe, fraud, and breach of trust" in a development that could prove fatal to his political career.

Benny Gantz, Netanyahu's main political rival, has slammed him for the immunity request, adding that the premier knows he is guilty.

‘I don’t really care’ about a trial in US Senate

4,000 US troops ordered to deploy in Middle East amid Iraq unrest