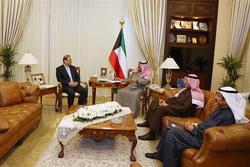 Kuwait says it respects Iran’s territorial integrity and national sovereignty against the backdrop of a recent meeting between Kuwaiti officials and a representative of an anti-Iran terrorist group.

The Kuwaiti official reassured the Iranian diplomat that his country respects territorial integrity of the Islamic Republic.

Jarallah pointed out that the anti-Iran meeting had taken place without permission from relevant Kuwaiti authorities, KUNA said.

Kuwaiti officials, the report added, have “begun taking necessary legal measures” over the “disappointing” affair, which was undertaken in a “private” capacity.

Director General for the Persian Gulf Affairs of the Iranian Foreign Ministry Alireza Enayati summoned the Kuwaiti envoy to also convey the Islamic Republic’s strong objection to the hosting by Kuwait of a conference against Iran.

The Iranian official stressed the importance of observing the principle of mutual respect in bilateral relations and said, “Such a move is clear interference in the internal affairs of the Islamic Republic of Iran and a breach of the principle of good neighborliness as well as friendly remarks by the Kuwaiti officials.”

According to Press TV, the Iranian Foreign Ministry did not provide any more details about the group concerned or about which Kuwaiti officials had met the representative.

The speaker of the Kuwaiti National Assembly, Marzouq al-Ghanim, has reportedly met with a member of the al-Ahwaziya terrorist group on the sidelines of a parliamentary conference calling for the breakaway of the southwestern Iranian city of Ahvaz from the country.

In a meeting with Kuwait’s Crown Prince Sheikh Nawaf al-Ahmad al-Jaber al-Sabah in August, Iranian Foreign Minister Mohammad Javad Zarif highlighted bilateral ties between the two countries, saying “foreigners” have no place in the region and have to leave.