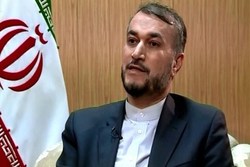 Senior Advisor to the Iranian Parliament Speaker Hossein Amir Abdollahian blasted the foreign countries’ military presence in the Persian Gulf, and said that the countries of the region can maintain the security of their waterways themselves.

RNA - “Preserving and maintaining security of the Persian Gulf requires collective cooperation of countries in the region,” Amir Abdollahian tweeted on Tuesday.

He noted that The consequences of the US and foreigners’ military presence as well as aggregation of weapons of foreigners in the Persian Gulf region fuel flames of insecurity in the region.

“Dialogue, confidence building and mutual respect are a necessity in the region, so that Islamic Republic of Iran has always proposed this path,” Amir-Abdollahian added.

He reiterated that preserving the security of the Persian Gulf needs collective cooperation of countries of the region.

In relevant remarks earlier in December, Iranian Foreign Minister Mohammad Javad Zarif called on the regional countries to respect developing relations with their neighbors, and said that the Islamic Republic has always supported the same diplomacy at international events and fora.

“Iran has offered the Persian Gulf littoral states to join Tehran’s peace initiative, known as HOPE, with the aim of enhancing realistic cooperation,” Zarif wrote on his Twitter account.

“Realpolitik has failed miserably in providing security for anyone in the Persian Gulf. Let’s try more ‘realistic’ cooperation: the #HOPE initiative,” the Iranian foreign minister added.

HOPE — an acronym for Hormuz Peace Endeavor — was unveiled by President Hassan Rouhani at a September meeting of the UN General Assembly, where he invited all countries affected by tensions in the Persian Gulf region to join a coalition meant to enhance friendship and safeguard the region without relying on outsiders.