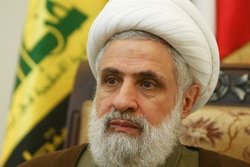 Deputy Chief of Lebanon-based Hezbollah Movement Sheikh Naim Qassem appreciated Iran for its crucial role in saving the axis of resistance in the region.

RNA - “We recognize the Islamic Republic of Iran as the head of the Axis of Resistance,” Sheikh Qassem said while addressing the 33rd International Islamic Unity Conference, which opened in Tehran on Thursday.

He noted that that the members of the resistance movement follow the same goal under the guidance of Iran’s Supreme Leader Ayatollah Seyed Ali Khamenei.

Sheikh Qassem lauded the main role played by Iran in the ongoing battle against the global arrogance in the region.

The Hezbollah deputy secretary-general reiterated that unity is the key to conquer the enemies, and said, “Holding the Islamic Unity Conference is one of the wisest moves to reach integrity and unity in the Muslim World.”

According to Fars News Agency, the International Islamic Unity Conference, themed “Ummah unity in defending the Al-Aqsa Mosque,” started on Thursday with the participation of 350 personalities from 93 countries and will continue until November 16.

The conference is held annually in an effort to lay the ground for stronger unity and solidarity among Muslims and provide solutions for their problems.

US, allies benefiting from Lebanon unrest to advance own interests