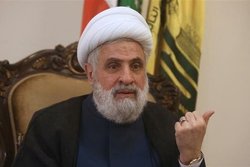 The Lebanese Hezbollah resistance movement has dismissed the condition promoted by the United States as a prerequisite for the formation of a new administration in Lebanon, amid nationwide anti-government demonstrations that have led to the resignation of prime minister Saad al-Hariri.

RNA - Hezbollah Deputy Secretary General Sheikh Naim Qassem dismissed the US stance in a meeting with a delegation from the Lebanese Islamic Unionist Party, led by Omar Ghandour on Monday.

Qassem underlined the need for the establishment of a government of “salvation,” which he said would stop Lebanon’s financial and economic deterioration, initiate reforms, confront corruption, and prevent the foreign political exploitation of the woes in the Arab country.

“The formation of the government is the common denominator” of all groups and people in Lebanon and it “cannot be subjected to US conditions, and cannot be used as leverage for political options,” the Hezbollah official said.

Protests erupted in Lebanon on October 17, when the government proposed taxed on Whatsapp calls, along with other austerity measures.

Hariri stepped down on October 29, surrendering to one of the demands of the protesters, who accuse the ruling political elite of pushing Lebanon toward economic collapse. Hariri said at the time that he had reached a “dead end” in trying to resolve the crisis that had paralyzed the country for two weeks, namely the protests.

Later, a senior official familiar with Hariri’s thinking told Reuters that the former prime minister was ready to retake his job at the head of a new government on the condition that it includes “technocrats” and can quickly implement reforms to stave off economic collapse.

Later, testifying before the US House Subcommittee on the Middle East, former US ambassador to Lebanon Jeffrey Feltman suggested that Washington had to back Hariri and endorse his condition, attributing that requirement to the people of Lebanon.

“With the demonstrators calling for a technocratic rather than political government, our public messaging can emphasize our expectation that a new Lebanese government, if it seeks international support, should effectively and immediately address the reform aspirations of the Lebanese people,” Feltman said.

According to Press TV, he said “the demonstrations [in Lebanon] and the reactions to them by Lebanese leaders and institutions fortunately coincide with US interests.”

The comments angered the Lebanese, with hundreds of them holding a protest near the US Embassy outside Beirut on Sunday against America’s intervention in Lebanon’s affairs. They also burned US and Israeli flags during the protest.

In an interview with Reuters on Friday, Qassem had described the US as the biggest obstacle in the way of the formation of a new government in Lebanon.

Palestinian rage roaring over US policy shift on Israeli settlements