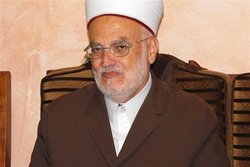 Israeli officials have banned a high-ranking Palestinian Muslim cleric from entering al-Aqsa Mosque in occupied East Jerusalem al-Quds amid an escalation of acts of violence by Israeli forces and settlers against Palestinian people.

RNA - Israeli police forces raided the house of the head of the Supreme Islamic Commission and the Imam of al-Aqsa Mosque, Sheikh Ekrema Sabri, in occupied Jerusalem al-Quds early on Saturday and handed him a notice, banning him from entering the sacred site for four months.

The measure came hours after Sheikh Sabri ignored an Israeli ban, and entered al-Aqsa Mosque to perform Friday prayers while being carried on the shoulders of worshipers.

The imam arrived at the Lion Gate entrance, in the northern side of Al-Aqsa Mosque, but Israeli forces stationed there initially prevented him from entering the mosque.

Sheikh Sabri, however, insisted on entering the mosque, arguing that it is his right to have free access to the Islamic holy site. He entered al-Aqsa Mosque, accompanied by a number of Muslim community leaders and lawyers.

Israeli troops fired rubber-coated steel-bullets and attacked the worshipers in order to force them out of the religious site.

The al-Aqsa Mosque compound is a flashpoint, highly respected by Muslims, Jews, and Christians alike. The mosque is Islam’s third holiest site.

Palestinians have long been wary of Israeli attempts to change the status quo of al-Aqsa Mosque, where only Muslim prayers are allowed under the status quo reaffirmed in 1967.

The holy compound is administered by the Islamic Waqf endowment on behalf of Jordan and Palestine. Non-Muslims can visit the site, but cannot pray there.

This coincided with the chief rabbinate of Israel’s declaration in 1967 that Jews were not allowed to the compound as it would desecrate the site's holiness.

However, Israeli settlers, escorted by the regime’s military, frequently desecrate the site by forcefully entering the compound.