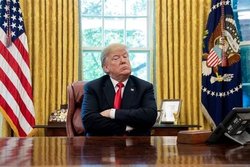 US President Donald Trump says he would get a Nobel Peace Prize "if they gave it out fairly."

RNA - He made the comments among Pakistani reporters shortly before a meeting with Pakistani Prime Minister Imran Khan on the sidelines of the United Nations General Assembly on Monday.

"I do appreciate the tremendous spirit of the press," Trump said. "I don't see that with us — ours always tear our country down. With your press they want to see something positive in the country."

One of the reporters suggested that the US president would deserve a Nobel Peace Prize if he could help solve the conflict between Pakistan and India over Kashmir.

“I think I’m gonna get a Nobel Prize for a lot of things, if they gave it out fairly, which they don’t," Trump said.

"They gave one to Obama immediately upon his ascent to the presidency, and he had no idea why he got it," Trump said. "And you know what? That was the only thing I agreed with him on."

Obama received the award despite being the only US president to serve two complete terms with his country at war.

Critics say Trump does not deserve the prize either as he has so far scrapped the Iran nuclear deal despite global condemnation, stepped up unauthorized US military interventions in Syria, Afghanistan and a number of African countries.

Should he win the award, Trump will be the fifth American president bestowed with the honor after former Presidents Theodore Roosevelt, Woodrow Wilson, Jimmy Carter and Obama.