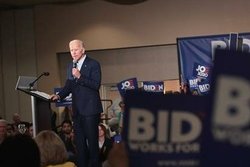 A new opinion poll shows that former US Vice President Joe Biden still tops the crowded list of Democratic presidential nominations for the 2020 race despite a growing challenge from rivals.

RNA - The Emerson College poll published on Tuesday found that Biden enjoys the support of 25 percent of registered voters after a 6-point fall from the same poll in August, while Senator Elizabeth Warren (D-Mass.) has surged to 23 percent, an 8-point rise since last month’s survey.

The Emerson College poll was conducted between September 21 and 23 among 1,019 registered voters with a margin of error of 3 percentage points.

Biden is the front-runner for the Democratic presidential nomination for the 2020 election.

Biden has come under fire for his clanger-laden campaigns during his latest presidential run and his slip-ups have been providing US President Donald Trump with ammunition to attack Democrats.

Since launching his bid for 2020 presidency, the veteran politician has been referred to as "Sleepy Joe" by Trump, among other cases of name-calling.

The 76-year-old has also been lambasted for what his opponents and others have deemed inappropriate touching, hugging and sniffing of women and children. Biden has dismissed such allegations.