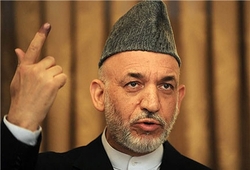 RNA - During the meeting with Taherian on Saturday, Karzai reviewed issues related to the peace process in Afghanistan, as well as bilateral ties between Iran and Afghanistan and also regional developments.

He pointed to the friendly and historical bonds between the two neighboring countries and placed special emphasis on the key and vital role of the Islamic Republic of Iran in restoration of peace and stability in Afghanistan.

In a statement late on Friday, Iranian Foreign Ministry Spokesman Seyed Abbas Mousavi categorically denounced all attacks that are targeting civilians in Afghanistan, urging Afghan interest groups to find a peaceful resolution without a foreign interference.

Mousavi voiced concern over the escalation of military conflicts and attacks on public services and civilian gatherings in Afghanistan, and condemned any operation that would endanger the lives of civilians, particularly women and children.

The diplomat then expressed hope that all forces with an interest in the future of Afghanistan would overcome the current difficult situation through peaceful means and without any foreign interference.

Local officials reported on Thursday that at least 30 civilians were killed and 40 injured in an air raid conducted on Wednesday night by the Afghan security forces, backed by US air support, in Eastern Afghanistan,

Sohrab Qaderi, a provincial council member in Eastern Nangarhar province said a drone strike killed 30 workers in a pine nut field and at least 40 others were injured.

Malik Rahat Gul, a tribal elder in Wazir Tangi, noted that the air raid happened at a time when tired workers, mainly daily wage earners, had gathered near their tent after harvesting pine nuts in a field nearby.

"The workers had lit a bonfire and were sitting together when a drone targeted them," Gul added.

Earlier this month, four brothers were killed in a raid by the CIA-trained and funded 02 Unit of the National Directorate of Security (NDS) spy agency.

Also on Thursday, at least 20 people were killed in a suicide truck bomb attack carried out by the Taliban armed group in the Southern province of Zabul.

The fighters wanted to target a training base for Afghanistan's powerful National Directorate of Security, but parked the explosives-laden truck outside a hospital gate nearby, according to a defense ministry source said.