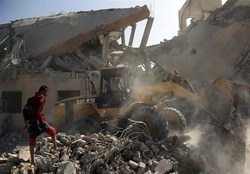 Saudi Arabia still owes the US military $181 million for aerial refueling assistance it received for its brutal bombardment of Yemen’s mostly civilian targets amid Pentagon plans to send more troops to the despotic kingdom to purportedly bolster its air defenses against retaliatory drone attacks by Yemeni forces.

The development came after US President Donald Trump emphasized to reporters on Monday that the despotic regime in Riyadh has been a “great ally” for its investments across America, insisting that “Saudi Arabia pays cash.”

While addressing reporters at the White House on Friday, Trump further pointed to Washington’s efforts to build a regional coalition against Iran and emphasized: “We’re also working on the cost of this whole endeavor, and Saudi Arabia has been very generous.”

According to the report however, Saudi’s refusal to pay for US refueling support has already enraged American legislators, many of whom feel frustrated with the kingdom’s involvement in the brutal murder of journalist Jamal Khashoggi as well as the massive civilian casualties the regime has inflicted during its war of aggression on neighboring Yemen.

“Saudi failure to reimburse us for aircraft refueling — hundreds of millions in taxpayer dollars — involves both deep insult and costly injury. It is entirely unacceptable that the Saudis have not reimbursed the Department of Defense for hundreds of millions in refueling costs," said Democratic Senator Richard Blumenthal of Connecticut in a statement cited in the report.

“The American taxpayer-funded US Department of Defense is not the Saudi Royal Family’s piggy bank,” it added.

Inquiries from Blumenthal and Senate Armed Services Committee ranking member Jack Reed of Rhode Island also prompted the US military to announce in December that it would seek to recoup the money it failed to charge Saudi Arabia and the United Arab Emirates (UAE) for the midair refueling assistance ― which Riyadh ended in 2018.

The report further cited congressional sources as saying that the original balance due was since revised from $331 million to $291 million, and the Pentagon has separately recovered $118 million from the UAE, but Saudi Arabia has not repaid the US.

Pentagon spokeswoman Cmdr. Rebecca Rebarich refused on Thursday to elaborate on its collection efforts but confirmed that "the process of reimbursement is continuing, and we continue to expect full reimbursement of refueling expenses.”

This is while Trump was due to hold a meeting on Friday to purportedly consider military options against Iran, the report added, citing “US officials familiar with the planned discussions.” It further pointed out that the American president was also due to be warned that any military action against the Islamic Republic would likely escalate into a war.

Tehran has fiercely rejected any involvement in the retaliatory attack by Yemeni forces against Saudi oil facilities and warned Washington that any military action against it will spell into an “all-out war” with immediate retaliation.

Meanwhile, congressional critics of the US president insist that he should not lead the country into an unnecessary conflict with Iran to protect Saudi Arabian oil.

US drone kills 30 Afghan civilians instead of Daesh terrorists