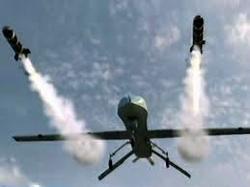 US drone strikes that have left a host of innocent civilians dead or injured over the past years in Afghanistan have not been conducted as Americans claim on wrong intelligence or a “mistake” but are coordinated by the CIA, a political analyst and former US intelligence officer says.

RNA - “Unfortunately a lot of the casualties that are civilians are not a mistake; these are just the decisions that are made at the CIA, that we are going to go ahead and sacrifice these civilians in order to target these particularly high value targets,” said former American intelligence linguist, Scott Rickard, during an interview with Press TV’s The Debate program on Thursday, referring to militant hideouts the US military claims to target via its indiscriminate drone attacks.

“So there are many situations in which the Americans do knowingly target civilians,” Rickard added.

The American political analyst also went on to say that the CIA was “very much in charge” of deciding whether or not Washington would withdraw troops from Afghanistan and that US President Donald Trump had “no say” in troop withdrawals since Washington enjoyed financial gains from the opium trade rampant in and out of the war-inflicted country.

“The elephant in the room not being discussed is the tremendous financial gain that is being made by the opium and heroin industry and the involvement of not only the Americans but other players in the region that have made tremendous amounts of cash and revenue off of this opium industry for decades now… The Americans are seen as occupiers and they are absolutely gaining the most from the opium industry, from both illicit drugs and the pharmaceutical industry,” Rickard said.

About 14,000 US troops are in Afghanistan, allegedly to train and advise Afghan security forces and prepare them to take on the Taliban and Daesh.

The Taliban’s five-year rule over at least three quarters of Afghanistan came to an end following the US invasion in 2001, but 18 years on, Washington is seeking a truce with the militants, who still control large swathes of territory.

The Taliban has so far rejected a proposal to lay down arms and instead called on the US to end the use of force in Afghanistan. It also insists that talks cannot move ahead until foreign forces leave the country.

Trump ended the talks and canceled a possible meeting with Taliban leaders in the US after finding out that an American soldier had been killed in a Taliban attack that killed 12 people in the capital Kabul on the same day as talks were to take place.

According to the United Nations, nearly 4,000 civilians were killed or wounded in the first half of the year.