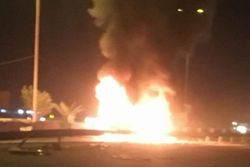 Security officials say several others wounded in the blast.

RNA - At least 12 people have been killed and several others wounded in a blast from a bomb planted on a bus near the Iraqi city of Karbala, south of Baghdad, two local police officers said.

Two police spokesmen at the blast site told Reuters news agency that an explosive device planted on the bus detonated at a northern entrance to the city, setting fire to the vehicle.

Quoting local officials, the Associated Press said five passengers were wounded in the explosion, which occured as the bus was passing through an Iraqi army checkpoint between Karbala and the town of al-Hilla.

The officials said all of those killed were civilians. There was no immediate claim of responsibility for the blast.