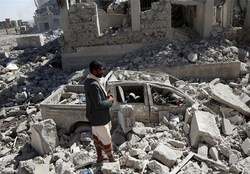 Iran on Tuesday strongly condemned the recent Saudi assault on Yemen's residential areas which killed and wounded dozens of civilians, including women and children, regretting that Riyadh continues to insist on its strategic mistake.

RNA - “Continued bombardment of residential complexes by Saudi Arabia which comes despite the Sana’a National Salvation government’s initiative to stop missile launches into Saudi Arabia in return for an end to the Saudi bombardment, that has also been welcomed by the international community, shows that the aggressors still keep beating on drums of war and insist on their strategic mistake in using a military approach in Yemen,” Foreign Ministry Spokesman Seyed Abbas Mousavi stated on Tuesday after Saudi air raids killed and wounded tens of people in Southwestern and Western Yemen.

The latest Saudi airstrikes killed at least 16 people, 11 of them women and children, in Southwestern Yemen. The aerial bombardment targeted a residential building in the province of Dhale on Tuesday.

On Monday, Saudi warplanes bombed a mosque in Amran province in Western Yemen, killing seven people, including children and women. The victims were from the same family and had taken refuge in the mosque in order to avoid Saudi assaults.

An Ansarullah official on Friday stated that the movement would stop targeting Saudi territories with drones and ballistic missiles, hoping Riyadh would reciprocate the gesture. The United Nations welcomed the proposal by Yemen’s Ansarullah movement, but Saudi Arabia has so far refused to accept the offer.