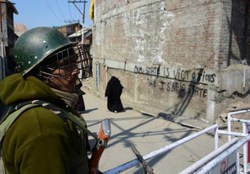 President of Azad Jammu and Kashmir Sardar Masood Khan on Saturday lamented over the United Nations Secretary-General Antonio Guterres's statements on Kashmir and said "he is trying to maintain an artificial balance between Pakistan and India''.

RNA - According to a statement issued from his office, Khan, speaking at an event in the National Defense University Islamabad, stated that ''the UN Secretary-General is trying to maintain an artificial balance between Pakistan and India through his very cautious statements on the annexation of occupied Kashmir to the Indian Union," Anadolu news agency reported

The Pakistan administered Kashmir president's remarks came days after the UN chief's Wednesday statement in which he said "I go on with a clear opinion that human rights must be fully respected in the territory”.

During the news conference at the outset of the 74th session of the UN General Assembly in New York, the UN secretary general was asked how he would go beyond making statements and “act to bring about a solution to this [Kashmir] crisis''.

“Well, our capacity is related to good offices, and good offices can only be implemented when the parties accept it. And, on the other hand, it relates to advocacy, and the advocacy was expressed and will be maintained,” Guterres noted.

However, khan added that the people of disputed Jammu and Kashmir territory had been cut off from the rest of the world since August 5, due to curfew and media blockade.

"Kashmiri people in the held territory remain confined to their homes without any food and water, while hospitals have run out of life saving medicines," he stressed.

The detainees have been shifted to most notorious prisons all over Northern India to punish them for demanding their internationally recognized right of self-determination, he added.

Khan praised the role of global media in highlighting the Kashmir issue and criticizing the Indian actions which according to him had helped develop a factual narrative on the situation of Jammu and Kashmir.

"Modi [Narendra Modi] regime is poised to disintegrate Pakistan and retake Azad Kashmir through proxy wars," Khan warned, saying, ''We need national unity and the military will have to remain prepared to counter any eventuality.''

Khan stressed that the international community must take notice of the Indian threats of using nuclear weapons against Pakistan.

Indian-administered Jammu and Kashmir has been under a near-complete lockdown since August 5, after India scrapped its special status, with the government blocking communication access and imposing restriction on movement to thwart any protests in the region.

India said that 93% of the restrictions have been eased in the conflict-ridden region, a claim that Anadolu Agency could not verify independently.

From 1954 until August 5, 2019, Jammu and Kashmir enjoyed special status under the Indian constitution, which allowed it to enact its own laws. The provisions also protected the region's citizenship law, which barred outsiders from settling in and owning land in the territory.