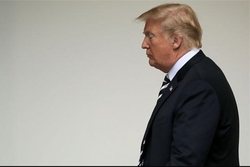 “US foreign policy is One Big Hate Crime,” American writer and political analyst Daniel Patrick Welch has said, adding that “Hate Crime… is part and parcel of what America is.”

RNA - US Senator Bernie Sanders on Sunday accused President Donald Trump of creating a climate for hate crimes and racially motivated attacks such as the recent mass shooting that killed 22 people in El Paso, Texas.

Sanders, who is looking forward to win the Democratic Party’s 2020 presidential nomination to challenge Trump, said Sunday that didn’t want “to see somebody get shot” but his rhetoric promoted violence.

Commenting to Press TV on Monday, Welch said, “Well, Bernie is the latest to go on the talk shows and excoriate Trump and his racism etc, etc. You know, obviously it is absolutely essential to condemn Trump’s racist rhetoric and the disgusting sentiments that he stirs up but he is only lifting the surface.

“I think it is equally critical to make systemic analyses of the situation as it is. You know, just announcing this as one hate crime is, and to say that the Republicans or Trump are responsible for it is ludicrously hypocritical. It’s ridiculous,” he stated.

“You know, if you wanna talk about hate crime, US foreign policy is One Big Hate Crime. The mass incarceration state is One Big Hate Crime. Exceptionalism--so many of these philosophies and ideologies that emanate from the idea of the US as it is are murderous... Are policies that actually kill millions of people,” he noted.

“The sanctions on Iran, the sanctions on Venezuela, the embargo on Cuba—all of these policies are racist in orientation, and murderous in their intent. They are what Henry Kissinger said about Chile before trying to overthrow Allende, ‘Make the economy scream.’ That’s the point of it, medieval siege warfare,” the analyst said.

“It is difficult to actually have any criticism within this two party system because there isn’t really anything allowed. One of these candidates are going to be chosen. And to be fair to Sanders, he is one of the very few candidates who does make sweeping, systemic criticism of US social and political economy but of course that’s the very reason that his candidacy will be denied if they can get away with it. They want Biden, or they want some sort of neoliberal continue to what they have been doing for last forty, fifty years,” he noted.

‘Hate Crime is part and parcel of America’

“But this whole concept of the Hate Crime and to use one single issue to paint the other side, it’s just a diversionary tactic to avoid addressing the central issue. This is what the Kerner Commission said fifty years ago that America was drifting towards two societies, one black and one white. That is the hate crime. That is the overwhelming, destructive and malignant cancer, a political crime that has been going on, that is part and parcel of what America is,” he said.

“That’s the discouraging thing when politicians say ‘this is not what we are’, oh, really!? Read a history book you jackass. This is exactly what America represents, and has been doing at home and abroad for its entire history,” the commentator said.

“The wars are business. The military-industrial complex is a hate crime. We’re awash in the blood that our government has shed for the profit of the oligarchs.  And nobody really wants to take on—or at least no one is allowed to take on that reality. It’s sad but that’s the state of things,” Welch concluded.