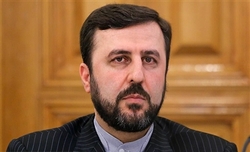 Iran's representative to international organizations based in Vienna has denounced the administration of US President Donald Trump over imposing sanctions on Iranian Foreign Minister Mohammad Javad Zarif, calling on the international community to take urgent action and confront the illegal move.

RNA - In a letter to secretary generals of world organizations and ambassadors based in Vienna on Saturday, Kazem Gharibabadi said the sanctions on the top Iranian diplomat were “flagrant violation of the fundamental principles and norms of international law,” which would undermine “diplomacy and multilateralism.”

“This arbitrary decision by the United States has once again exposed the deep-seated dichotomy of its officials in making contradictory statements. The measure is also in violation of the principles and rules of diplomatic law and the immunity of high-ranking officials.”

He said that Zarif has been sanctioned for representing the Iranian nation to the best of his ability and for being a sincere advocate for dialogue, diplomacy, peace and multilateralism.

He was referring to a resolution, which endorsed a multilateral nuclear deal struck in 2015 between Tehran and six world countries — the US, France, Britain, Russia and China plus Germany, from which Washington withdrew last year and reimposed sanctions on the Islamic Republic.

“The UN, its subsidiary bodies and specialized agencies as well as all its member states must stand together in defending the principles of international law and the rejection of global prejudice,” to prevent “long-term negative impacts for diplomacy and its vital functioning,” he concluded.

On July 31, the US Treasury Department said that it was imposing sanctions on Zarif — whom it described as Iran’s “primary spokesperson around the world” — for acting on behalf of Leader of the Islamic Republic Ayatollah Seyyed Ali Khamenei.

The bans drew condemnations from Iranian statesmen and military officials. The European Union — which has been cooperating with Zarif in a successful diplomatic process on Iran’s nuclear program — also expressed regret over Washington’s bans.

According to Press TV, Zarif, himself, mocked the bans and said the US’s “reason for designating me is that I am Iran’s ‘primary spokesperson around the world’. Is the truth really that painful?”

He reiterated that the sanctions “have no effect” on him or his family, as they “have no property or interests outside of Iran.”

Zarif is seen as the architect of the 2015 multilateral nuclear deal, officially known as the Joint Comprehensive Plan of Action (JCPOA).

Tensions between Washington and Tehran escalated after Trump pulled his country out of the JCPOA in May 2018 and re-imposed harsh sanctions against the Islamic Republic in defiance of global criticisms.