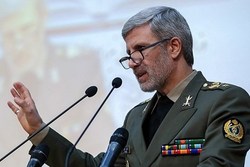 Iranian Defense Minister Brigadier General Amir Hatami warned that the military coalition that the US is attempting to form in the Persian Gulf will undermine regional security.

RNA - "The military coalition that the US is after under the pretext of protecting security of shipping will increase insecurity in the region," General Hatami said in separate phone talks with his Qatari, Omani and Kuwaiti counterparts.

During the phone conversations, he congratulated his counterparts on the occasion of Eid al-Adha, and discussed the latest developments in the region, specially the US provocative moves regarding the Persian Gulf security.

General Hatami also highlighted Iran’s continued efforts to maintain peace and security all over the Persian Gulf, the Sea of Oman and the Strait of Hormuz.

He stressed that the region’s security should be provided by the regional states, calling for a constructive dialogue among the neighboring countries to boost their cooperation regarding the matter.

Noting that the trans-regional powers have been busy for decades with creating rifts among the neighboring countries, General Hatami reiterated that the US so-called coalition, just like its other measures, would bear no result but increasing the tensions in the region.

The United States has been trying to persuade its allies into an international coalition with the declared aim of providing “security” for merchant shipping in the Strait of Hormuz — which accommodates around a third of global seaborne oil traffic —and other strategic Middle Eastern shipping lanes.

Washington’s call has, however, been met with little interest from Washington’s allies, which are concerned that joining such an alliance could drag them into a conflict with Iran.

The French are noncommittal, while Germany, Italy and Sweden have rejected joining the alliance.

German Foreign Minister Heiko Maas on Monday said Berlin favored a European mission but warned it was rather difficult to make progress on the initiative.

“At the moment the Britons would rather join an American mission. We won’t do that,” said Maas.

Last Sunday, former IRGC Commander Mohsen Rezayee said that despite the malicious efforts of the US and UK to claim control over the Strait of Hormuz with escalating tensions in the Persian Gulf region, Tehran will not allow such a thing to happen.

“Americans and the British have been fanning the flames of war in the Persian Gulf region to pretend they have control over the Strait of Hormuz and the movement of vessels. Of course, we do not allow this to happen. In the meantime, we expect cooperation from our friends in China,” Rezayee said in a meeting with a senior Chinese delegation headed by Song Tao, the Head of the International Department of the Central Committee of the Communist Party of China (CPC), in Tehran.

According to Fars News Agancy, he added that Iran is not seeking war but will defend itself, while the Americans want conflict and seek to increase the tensions.

“Persian Gulf security is our security and we have to respond to their attacks and destabilizing actions in order to maintain security,” the Secretary of the Iranian Expediency Council (EC) said, adding, “We want free shipping and security in the Persian Gulf.”

“We live in the energy region of the world. Any kind of insecurity and conflict in this region would carry harm to global peace and security,” Rezayee said pointing to the new developments in the region.

US Ultimate Loser in All Encounters with IRGC Navy

Zarif Raps London for Complicity with US Economic Terrorism against Iran