US Ultimate Loser in All Encounters with IRGC Navy 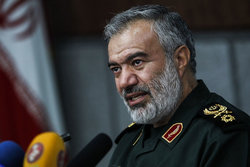 American forces in the Persian Gulf have always been ultimate losers in all encounters with the Islamic Revolution Guards Corps Navy (IRGCN) in the past 40 years, Deputy Commander of the IRGC Rear Admiral Ali Fadavi said on Monday.

RNA - Rear Admiral Fadavi said today that all failures and defeats of the US forces in the Persian Gulf are illustrative of the Americans’ desperation, frustration, and agony in the face of the Iranian nation in the past 40 years.

“Americans have always been the ultimate and full-scale losers in all their encounters with the IRGCN, and the most notable cases of their defeats were on April 14, 1988, and January 12, 2016 before their drone was shot down on June 20,” the senior commander added.

On June 20, the IRGC shot down an intruding American spy drone in the country’s Southern coastal province of Hormozgan.

In a statement issued early on June 20, the IRGC said the US Navy MQ4-C Triton surveillance drone was brought down by its Air Force near the Kouh-e Mobarak region — which sits in the central district of Jask County — after the aircraft violated Iranian airspace.

A month later, the US ramped up military propaganda against Iran, claiming the US forces “may have brought down” a second Iranian drone, while failing to procure any evidence for bringing down the first one despite claiming to be in possession of its footage.

Iran has asserted that all of its drones are accounted for but CENTCOM Commander Gen. Kenneth McKenzie claimed in an interview with CBS News on July 23 that he was “confident” about the first one.

"We're confident we brought down one drone; we may have brought down a second," McKenzie said, referring to the USS Boxer's encounter with an unmanned aircraft allegedly belonging to Iran.

McKenzie’s comments stepped up Washington’s baseless claims for which it has released no footage so far.

Moving between the Persian Gulf and the Gulf of Oman, the USS Boxer is said to have used electronic measures to take down a drone that the US claims was being operated by Iran.

According to Fars News Agancy, Iran has denied that it has lost any of its drones in a military confrontation with the US.

“The lie told by Trump was so big that we believed it at first that they had been able to shoot down one of our drones,” Hajizadeh noted on July 21.

Iran’s IRGC also released footage captured by an Iranian drone flying over the Strait of Hormuz and monitoring a United States Navy vessel, belying the claim.

A few hours after Trump's allegation, Iran moved to reject his claim with Iranian Deputy Foreign Minister Seyed Abbas Araqchi saying in a tweet, “We have not lost any drone in the Strait of Hormuz nor anywhere else.”

National Security Advisor John Bolton told reporters at the White House on July 20 that the Trump administration may release video of the incident later. But this never happened.