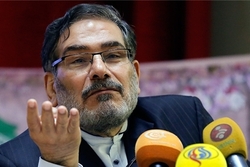 Secretary of Iran's Supreme National Security Council (SNSC) Ali Shamkhani slammed the US for imposing sanctions against Foreign Minister Mohammad Javad Zarif, and said that the train of “maximum pressure” has now stopped at the station of frustration.

RNA - Shamkhani published a note in the Iranian media on Sunday, explaining why the US maximum pressure campaign against Iran has failed.

By withdrawing from Iran nuclear deal and adopting maximum pressure policy against Iran, Trump tried to prove to the world that he is a different individual who can gain most interests with the least possible costs, said Shamkhani, adding, “Maximum pressure policy’s design concentrated on weakening foundations of Islamic Revolution power, i.e. the Leadership, people, IRGC and Foreign Ministry. And sanctions were used as a tool with the lowest costs to damage the basis of Iran’s authority.”

“Cold and confrontational reaction of people, gradual stabilization of the country’s economic conditions, an influential increase in regional and international moves, and firm stances of Islamic Revolution Leader made Trump feel disappointed in the path while also increasing international and internal rivals’ pressure on him in an unprecedented way,” stressed the top official.

“Sanctioning the Iranian Foreign Minister after he rejected Trump’s invitation for talks showed that the train of ‘maximum pressure’ has been stopped in the ‘failure station’ and all those abroad have no other choice than switch the railroad to the direction of implementing commitments and respecting legal rights of the Islamic Republic of Iran,” Shamkhani highlighted.

“Active and influential diplomacy of the Islamic Republic cannot be sanctioned. Neither Trump nor no one of its allies can prevent Iran’s clear and rightful voice from resonating in the world,” he concluded.

According to Fars News Agancy, Zarif, who has been Iran’s foreign minister since 2013, was the chief negotiator in the multinational nuclear deal known as the Joint Comprehensive Plan of Action (JCPOA).