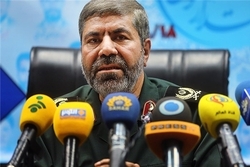 RNA - "The most complicated and equipped drones of the Americans cannot have safe pass through the IRGC's fire zone," General Sharif said, addressing a ceremony in the Eastern province of South Khorassan on Wednesday.

He stressed that the enemy can no more surprise Iran similar to what it did in the 1980s during the Iraqi-imposed war when they shot down an Iranian passenger plane, and said his country had 30 years after the war to produce defensive tools to protect itself.

General Sharif referred to the recent downing of an intruder US spy plane over Iran's territories by the IRGC, and stressed that the anti-air missile system that brought the US aircraft down was just a very small component of Iran's defensive weapons and defense power.

In relevant remarks on Monday, Commander of the Iranian Army's Khatam ol-Anbiya Air Defense Base Brigadier General Alireza Sabahi Fard underlined that the integrated radar system developed by Iran is capable of detecting and intercepting different types of US stealth planes and fighter jets.

"Today, we have gained full self-sufficiency in area of radar systems and powerfully detect different advanced US planes and give them warning," General Sabahi Fard said.

He also underscored Iran's astonishing progress in developing powerful defense systems, and said, "Our indigenized systems have made enemies realize that if they want to start a conflict with us, they will receive heavy blows."

Elaborating on the features and capabilities of the defense shield, General Hatami said that it can trace targets, including fighter jets and enemy drones, 150km away and intercept them at a range of 120km.

"It can also trace stealth targets in areas 85km in distance, and destroy them at a distance of 45km," he added.

General Hatami said that the missile defense system can trace, engage, and destroy 6 targets simultaneously, enjoys high mobility and can be prepared for operation in less than 5 minutes.

"The system is equipped with (passive) phased-array radar system with a multiple-target-engagement capability. It also has separate launch pads, and operates with Sayyad 3 missiles," he underlined.

The IRGC shot down a US Navy’s Northrop Grumman MQ4-C Triton drone that had entered Iranian airspace in the Gulf Oman to gather intelligence on June 20, using Sevvom Khordad indigenous surface-to-air missile system.

Commander of the IRGC Aerospace Force Brigadier General Amir Ali Hajizadeh said that his forces could have also shot down a US P8 aircraft with 35 on board which was violating Iran’s airspace, but decided to shoot down the drone to only send a message to Washington.

“We intended to send a message to American terrorists in the region,” Brigadier General Hajizadeh said on June 21, adding that his forces had also traced a military P8 aircraft violating the airspace of Iran.

General Hajizadeh also stressed on June 22 that Iran was not after war but was fully ready to defend itself, adding that the fate of the downed US spy drone was waiting for any intruding flying object.