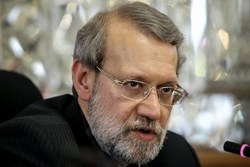 Iranian Parliament Speaker Ali Larijani in a meeting with Head of the International Liaison Department of the Communist Party of China Song Tao reiterated that Tehran and Beijing are both facing US hostilities, and said the two nations need to work out strategic cooperation to defuse Washington's hostile approach.

RNA - "I agree with your analysis that Iran and China are facing the US enmity. This hostility has no tactical dimension but it is strategic and deep and we should pursue a strategic thought against it," Larijani said during the meeting in Tehran on Tuesday.

"Consultations between Iran and China and the friendly states' companionship can help stand against the US hostility and foil its impacts and meantime, success of this plan depends on practical steps and their progressive move," he added.

Larijani described relations between Iran and China as beneficial to the global peace and security, and said, "The Revolution's Leader (Ayatollah Khamenei) and the Iranian government desire extensive relations between the two countries and the parliament supports these ties."

Song, for his part, stressed his country's enthusiasm for the further broadening of ties with Tehran, saying, "At present, Iran and China are facing the US pressure and bullying and one of the goals pursued in the visit is coordination between the two countries to confront the US unilateral and hegemonic measures."

During the meeting, Jahangiri underlined that his country's economy had remained stable one year after the US imposed the toughest embargos against Tehran.

"The US imagines that it can zero down our oil sales by exerting pressure on the countries which purchase Iran's oil to lead Iran's economy towards a collapse, but fortunately, the situation of Iran's economy enjoys an acceptable stability one year after the US oil sanctions," Jahangiri said.

According to Fars News Agancy, he described China as the main economic partner of Iran and oil customer, and said, "All high-ranking Iranian officials have put the strategy to develop ties with China on their agenda as a serious mechanism."

Elsewhere, Jahangiri warned that the US is after endangering the Middle-East and Persian Gulf security, and said, "The Islamic Republic of Iran's policy is based on supporting multilateralism and confronting the US hegemony and we are ready to cooperate with China in regional and international dimensions in this regard."

He also warned of the US "dangerous" attempts to transfer the ISIL terrorists from Syria to Afghanistan, stressing the need for standing against Washington's plots.

Jahangiri also referred to Iran's modification of its nuclear deal undertakings as a move to safeguard the agreement, saying that Iran will resume its halted undertakings once the other parties to the deal come to comply with their undertakings.

Song, for his part, blasted the US unilateralism and bullying, and said, "China is determined to develop relations with the Islamic Republic of Iran, and there will be no change to the agreements between the two countries, while the two states can also share their experiences to confront the US pressures."