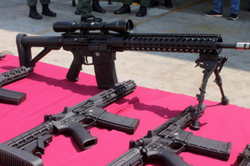 California Governor Gavin Newsom (D) has blamed US President Donald Trump and the Republican Party for a “culture of gun violence” following a deadly shooting in the state.

RNA - A gunman killed at least three people — a 6-year-old boy, a 13-year-old girl and a man in his 20s — at a California food festival on Sunday before being shot dead by police.  At least 15 people were injured during the mass shooting at the three-day Gilroy Garlic Festival in northern California.

“California’s doing its part, but Jesus, these guys, the folks in the White House have been supporting the kinds of policies that roll back the work that we’re doing,” Newsom said. “It keeps happening, over and over and over again, on their damned watch.”

Today, I met with a 12-year-old who was shot while in a bounce house. A grandmother mourning the loss of her 6-year-old grandson.
This is America today -- the shootings continue. Loved ones are buried. Children are gunned down. And Congress does nothing. pic.twitter.com/JLNb3vdAcM

Commenting on the governor’s statement American analyst Myles Hoenig said, “Trump certainly created a climate of increased hostilities and violence but both parties have served or feared the NRA and helped to maintain a culture of gun violence.”

"Congress only does what its most powerful corporate interests expect or demand of it," he added.

On Monday, Trump called the shooting “horrific” and condoled with the victims: “We will continue to work together as communities and as citizens to stop evil, prevent violence and protect the safety of all Americans.”

The 19-year-old suspected gunman was killed by police. He was reportedly wearing tactical gear and carried a long rifle.

“We thank the brave members of law enforcement — they never let us down — who swiftly killed the shooter,” Trump said.

In September last year, Amnesty International warned that the gun violence situation in the US has grown into a full blown "human rights crisis" and the administration of President Donald Trump was doing little to solve it.

Loose laws that allow people to own handguns without a license or permit in 30 US states and the lack of preventive measures such as a national registration system for gun owners were among the factors that Amnesty said contributed to the situation.

According to the organization, an average of 106 individuals died a day from firearm-related incidents in 2016, totaling 38,658. Of that figure, nearly 23,000 were suicides and more than 14,400 were homicides, Amnesty said.

The report also said that more than 116,000 people suffered injuries from firearms in 2016.