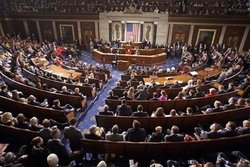 The US Senate stopped short of forming a majority required to override President Donald Trump’s veto earlier in the month of three congressional resolutions aimed at blocking the country’s arms sales to Saudi Arabia and the UAE.

RNA - On Monday, the chamber was set to try rendering the vetoes, which Trump issued against three congressional measures, ineffective, Reuters reported.

However, a first vote on trying to overturn one veto on a measure passed by Congress to block the sale of certain weapons to the Saudi kingdom was backed by 45 senators against 40. The Senate’s Republicans shunned the bid en masse, with only five supporting the vote. Fifteen senators, meanwhile, withheld their votes.

The vote tallies were similar in the two subsequent roll-call votes to override vetoes of the legislation blocking the additional weapons sales to Saudi Arabia, the United Arab Emirates and other countries.

The US has been supporting the Saudi-led war against Yemen that seeks to bring back the impoverished country’s former Riyadh-backed officials. The American patronage has featured aerial refueling, which the US only stopped earlier in the year after the Saudi-led coalition grew independent of it, as well as logistical and commando support. A year after the war was launched, Trump made his maiden foreign visit to Saudi Arabia, announcing more than $100 billion in arms sales to the kingdom.

Back in May, the Trump administration invoked an emergency provision of the law governing arms sales to push for the sale of $8.1 billion worth of munitions in 22 pending transfers to Saudi Arabia and the UAE and Jordan without the typical 30-day congressional review period. It claimed that the export was crucial to protect the region against what it called “the malign influence” of Iran.