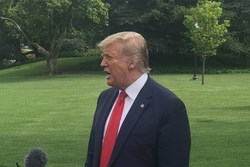 Former Massachusetts Governor Bill Weld, who is a longshot candidate for the Republican nomination for US president, has called President Donald Trump a "raging racist," adding that if Republicans don't denounce Trump in the upcoming election, they will be known as the "party of racism."

"And he made that choice, a choice a long time ago, when he was engaged in the housing business in New York with his father," Weld added.

"Unless the Republican Party in Washington expressly, expressly rejects the racism of Donald Trump, they're going to come to be universally viewed as the party of racism in America," he concluded.

Weld officially his launched his presidential election campaign in April to challenge Trump in the primaries, making him the president's only Republican opponent so far in the 2020 election.

Weld is a staunch critic of Trump. In an interview with CNN in April, Weld said it would be a "political tragedy" and he would "fear for the Republic" if Trump was reelected.

The president posted a series of racist tweets earlier this month, calling on the four lawmakers, who are some of her most fierce critics, to "go back" to the "totally broken and crime infested places from which they came" and fix them before criticizing the way America is governed.

This is while US Representatives Alexandria Ocasio-Cortez, Rashida Tlaib and Ayanna Pressley are natural-born US citizens, and only US Representative Ilhan Omar was born in Somalia and immigrated to the US as a teenager.

Trump’s comments about the four Congresswomen have been condemned by political and business leaders around the world.

The CEO of German industrial giant Siemens, Joe Kaeser, said last week that the Republican president has become the “face of racism and exclusion.”

Following Trump's racist tweets, German conservative politician Ruprecht Polenz said Germany would have to take Trump back if such comments were serious. Trump’s paternal grandparents were born in Germany and emigrated to the US in the late 19th century. Trump’s mother immigrated to the US from Scotland in 1930.