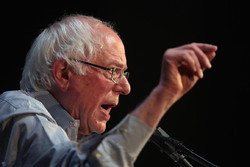 RNA - “Our policy cannot just be pro-Israel, pro-Israel, pro-Israel. It is got to be pro-region working with all of the people, all of the countries in that area. What we need to do is not say we’re 100% pro-Israel or 100% pro-Saudi Arabia. We hate Iran; we hate the Palestinians. That is not the role that the United States of America should play,” the social Democrat told  “Pod Save America” in an interview.

The Jewish lawmaker, who is a staunch critic of Prime Minister Benjamin Netanyahu, further said the Israeli leader is at helm of a regime with “many racist tendencies.”

“But I think what has happened is, in recent years under Netanyahu you have an extreme right-wing government with many racist tendencies. The role of the United States – and this is not easy – is to try to finally bring peace to the Middle East and to treat the Palestinian people with the kind of respect and dignity they deserve,” said the Vermont senator.

‘I am not anti-Israel’

Sanders asserted that he is “not anti-Israel,” but stating that “We are giving large sums of money.”

He further expressed hope that he could “bring people together” as the US president and prevent the US from spending so much money overseas.

Sanders was the only presidential candidate in 2016 not to address the American Israel Public Affairs Committee (AIPAC) conference, which is considered a must-stop for politicians who are seeking to bolster their pro-Israel credentials.