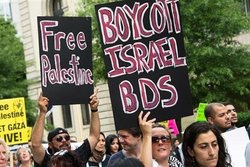 The US House of Representatives has passed legislation to oppose the global boycott movement against Israel, deepening Democratic divisions on relations with the key US ally.

RNA - The House approved on Tuesday a non-binding resolution that opposed the Boycott, Divestment and Sanctions (BDS) movement to press the Quds-usurping regime on human rights issues in its conflict with Palestinians.

Sixteen Democrats, mostly progressives, voted against the resolution. Among them were Representatives Ilhan Omar (D-Minn.) and Rashida Tlaib (D-Mich.).

Citing her family’s Palestinian roots, Tlaib said in her House floor speech that she “can't stand by and watch this attack on our freedom of speech and the right to boycott the racist policies of the government in the state of Israel.”

“Our right to free speech is being threatened with this resolution. It sets a dangerous precedent because it attempts to delegitimize a certain people's political speech and to send a message that our government can and will take action against speech it doesn't like,” Tlaib added.

The Republican-controlled Senate passed anti-BDS legislation earlier this year, making it easier for states to fight against the BDS movement.

The BDS movement was initiated in 2005 by over 170 Palestinian organizations and later turned international. It is meant to initiate “various forms of boycott against Israel until it meets its obligations under international law” and end its occupation of Palestinian lands.

BDS, which was inspired by the South African anti-apartheid movement, has claimed several recent successes in isolating Israel.

Israel and its allies in Washington have long railed against the BDS, which calls for people and groups across the world to cut economic, cultural and academic ties to Tel Aviv.

The battle over the BDS movement on the House floor came as Omar has been the target of attacks from US President Donald Trump, who in the last eight days has called her anti-American and anti-Israel.

Trump tweeted that she and three of her congressional allies should “go back” to where they came from, even though all are US citizens and three are US-born.