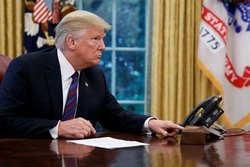 US President Donald Trump has renewed his attacks on four minority Democratic congresswomen, demanding that they "apologize" to the United States for the things they have said, even as he himself faces racism charges.

RNA - "I don’t believe the four Congresswomen are capable of loving our Country," Trump said in an early morning tweet on Sunday. "They should apologize to America (and Israel) for the horrible (hateful) things they have said. They are destroying the Democrat Party, but are weak & insecure people who can never destroy our great Nation!"

I don’t believe the four Congresswomen are capable of loving our Country. They should apologize to America (and Israel) for the horrible (hateful) things they have said. They are destroying the Democrat Party, but are weak & insecure people who can never destroy our great Nation!
— Donald J. Trump (@realDonaldTrump) July 21, 2019

Trump sparked an uproar last weekend after lashing out at four minority Democratic congresswomen, known as “The Squad”, telling them to go back where they came from if they do not like the United States.

In racist tweets, Trump told Representatives Alexandria Ocasio-Cortez of New York, Ilhan Omar of Minnesota, Rashida Tlaib Michigan and Ayanna Pressley Massachusetts to go back to fix their “broken, crime-infested” countries of origin before teaching how to run the US and speaking out about US policies.

Three of the four Representatives were born in the United States, but all are US citizens.

‘No doubt’ Trump is racist

US Representative Elijah Cummings, the Democratic chairman of the House of Representatives Oversight Committee, denounced Trump's Sunday attack on the congresswomen and said he had "no doubt" that the US president was a racist.

"These are folks and women who love their country and they work very hard and they want to move us towards that more perfect union that our founding fathers talked about," Cummings, who is African-American, told ABC.

Both Democratic and Republican lawmakers have so far condemned Trump's racist tweets, however, he has adamantly stood by his comments about the congresswomen, saying that they should leave the US if they are unhappy.

Trump's attacks have widely been seen as a bid to rally his right-wing base as the 2020 White House race heats up -- at the risk of inflaming racial tensions and deepening partisan divisions in America.