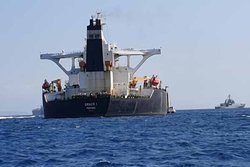 Iran has reacted strongly to the British seizure of an Iranian oil tanker off the coast of Gibraltar, an undisputed part of Spain, which the British claim sovereignty over.

RNA - Describing the British move as “destructive”, the foreign ministry quickly summoned the British ambassador to Iran, Rob Macaire, for a dressing down on the issue.

The 300,000-tonne super-tanker was allegedly transferring up to 2 million barrels of oil to the Baniyas refinery in Syria. However, initial British claims that they were enforcing European Union sanctions on Syria were not supported by any EU statements to that effect.

The EU dimension was undermined further when it quickly transpired that the British were acting on American orders, as confirmed by Spanish foreign minister Josep Borrell Fontelles.

This aggressive British action risks provoking a diplomatic incident with Spain, which disputes British sovereignty over Gibraltar, and regards the Strait of Gibraltar as exclusive Spanish territorial waters.

According to Borrell, Spain is looking into the seizure of the ship to ascertain how it may affect Spanish sovereignty as the super-tanker was, effectively, intercepted in Spanish territorial waters.

For their part, the Americans praised the British action with US national security advisor John Bolton describing the seizure as “excellent news”.

The decisive American input in the operation undermines claims by ambassador Macaire that the UK was attempting to enforce sanctions on Syria and not on Iran.

According to Press TV, the manner of the tanker’s seizure has sparked concern across the international community, with many analysts questioning the heavy-handed tactics employed by the UK Ministry of Defence.

Reportedly 30 commandos from the Royal Marines approached the Iranian tanker on a Pacific 24 high-speed boat and fast-roped into the vessel from a wildcat helicopter.

This unnecessarily aggressive, and highly unusual, manoeuvre has drawn concerns across the international community about the UK’s true intentions and raised questions as to whether Britain is trying to further inflame tensions between Iran and the US.

Increasingly, analysts and observers are beginning to doubt the UK’s commitment to the JCPOA nuclear deal. For, if Britain was genuinely committed to the deal (as the British government claims) then why deliberately undermine it by inflaming tensions and creating a major diplomatic incident through the enforcement of unilateral US sanctions against Iran?