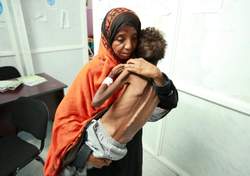 n a legal challenge brought by anti-arms trade campaigners, three of the UK’s top judges concluded that it was “irrational and unlawful” of the government to allow arms sales to Saudi Arabia without making proper checks.

RNA - The UK Court of Appeal has ruled that the British government has “made no attempt” to assess whether Riyadh had breached international humanitarian law in the Yemen war, Yemeni News reported.

However, the judges stated that their ruling does not mean that UK arms export licences to Saudi Arabia have to be suspended immediately.

The ruling was passed down by three senior judges after they accepted the legal challenge from the Campaign Against Arms Trade group, which has accused the government of licensing arms sales when it was clear their sales could breach international law.

According to Campaign Against Arms Trade, around £4.7bln worth of arms exports to Saudi Arabia have been licensed by the government since the Saudi-led intervention began in 2015 with record sales taking place before 2018.

According to Fars News Agancy, Saudi Arabia and a number of its regional allies launched a devastating campaign against Yemen in March 2015, with the aim of bringing the government of former Yemeni President Abd Rabbuh Mansur Hadi back to power and crushing the Ansarullah movement.