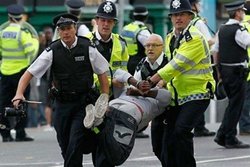 The media circus surrounding conviction of British ISIL terrorist’s parents over the transfer of £200 has overshadowed a much deeper seated social problem in Britain.

RNA - The Reverend Canon Dr. Rosemarie Mallett, a south London priest’s recent pledge to combat knife crime, has once again brought the epidemic of violence under the spotlight.  She has called for all parishes to open their doors between 15:00 and 18:00 BST "to have a [safe} space where young people can come".

Terrorism has been given centre stage, by both lawmakers and the media, to such an extent that The Counter-Terrorism and Border Security Bill was granted Royal Assent in February 2019, updating a previous Act, and bringing new powers to law enforcement to tackle terrorism.

It is now an offence to view terrorist material online just once – and could incur a prison sentence of up to 15 years.  Rights groups have been voicing concerns about the Bill’s potential misuse or even abuse by the authorities

As reflected in Canon Mallet’s recent pledges, ordinary citizens feel a greater threat from the new wave of knife crimes across the UK. Despite Terror related deaths and casualties having been less frequent, of lower impact across the nation and not of such an exigent nature, the government’s over obsession with  terrorism is viewed by activists as an excuse to push the nation into a 21st century Orwellian state.

The resources allocated to fighting the perceived threat of terrorism, compared to the actuality of violent crimes perpetrated each and every day throughout the kingdom, would appear to be disproportionately balanced. According to official government data there have been fewer than 200 terror casualties in the past two decades compared to over 2000 knife crime casualties during the past decade.