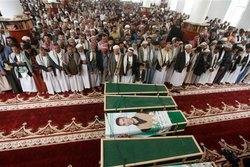 Reports from the ground highlight the deepening crisis for Yemen’s 26 million civilians, largely forgotten and caught in the cross-chairs of a protracted conflict that has had calamitous consequences for everyone in the Middle East. This is while some 16 million people were already in need of humanitarian assistance before the civil war began in 2015.

RNA - The present state of perdition has spread to all parts of the impoverished country as well. Hospitals, schools, airports and markets have all been damaged or destroyed, with reports of serious violations of human rights and international humanitarian law committed by Saudi Arabia and its cohorts.

Whatever the reality, people are still dying and the blockade and long-term neglect of basic services has become a major factor in the crisis. Yemen is facing serious humanitarian crisis and immediate action is needed by the United Nations (UN) and the international civil society to end the bloodcurdling war.

According to new data by the Armed Conflict Location and Event Data Project (ACLED), more than 91,000 people have been killed. These appalling numbers are estimates rather than exact counts. They serve as a warning, documenting the anguish Yemenis have endured thus far. War happy parties and war profiteers cynically boast about ‘precision’ warfare and ‘surgical’ strikes that distinguish between fighters and civilians. But the reality is that civilians are still routinely targeted where they live, work, study, and seek medical care.

Beyond the deaths and misery, the declaration of a ceasefire in the port city of Hodeidah as part of the UN-backed Stockholm Agreement has to some extent contributed to a partial drop in reported fatalities, but it’s not enough. Real-time data suggest there should be pressure on the Saudi-led coalition to stop nationwide concentrated anti-civilian violence, as other fronts like Ad Dali, Hajjah and Taiz continue to experience heavy casualties under the Saudis' lethal air strikes.

Keep in mind as well that a collapse in health and waste management services due to fighting has led to contamination, health risks, famine and cholera outbreak, posing a serious challenge not only for aid workers and civilians in affected areas but also for those who wish to return. The need for the UN aid agencies to offer medical assistance to these blockaded communities is no more than ever urgent. The shortage of medicine, drinking water contaminated by rotting garbage, devastated sewage systems and water filtration plants continue to exacerbate the cholera epidemic.

The devastation caused by the illegal war has also deprived Yemenis not just of their livelihoods but of the very tools they would need to launch a major reconstruction effort to rebuild the poorest country in the Arab world. The Middle Eastern society is now an economic basket case, rivaling the most desperate countries in the world.

By the standards of international humanitarian law, and before this human tragedy of the first order spirals out of control and becomes a point of no return, the UN Security Council must resolve the protracted conflict irrespective of regional politics and the US-backed Saudi coalition's new ground invasion proposals, airstrikes, clues and suggestions of every sort.

The Security Council should intervene and use the leverage it has to stop the violence and air strikes that pay scant heed to defenseless civilians, including people attending weddings and funerals. Concrete action is needed to reverse course and effectively protect millions who rely on UN emergency food aid to survive. The international community should hang its head in shame to say otherwise.

In this case, there is no need for outside powers like the US to overreact and seek to intervene. Their grim role only stands to antagonize the local population, exacerbate the situation and inject a stronger sectarian tone into the conflict, while threatening to push Yemen closer to collapse.

According to Fars News Agancy, if Iraq and Syria are a guide, the Saudi-led coalition will come out on the losing side. Their guns, drone attacks and airstrikes will not change the situation on the ground. They are risking too much on a pointless gambit, all but assuring that sectarianism, violence and insecurity within the country and beyond continues apace, making sure Yemen remains a failed state and a fertile ground for terrorist groups for many decades to come.

In a general sense, the only option has to be a negotiated solution, a position also shared by the UN. The Saudi-backed parties to the conflict should carry out political dialogue, as their fighting produces more bloodshed, more civilian deaths and more refugees.

This is a great test for the conscience of the world. The world has to reject the glorification of this immoral violence before it engulfs the entire region and before many more civilians are killed. The world must force war happy Saudis and American merchants of death to stop making lies sound truthful and murder respectable, accept and implement a nationwide cessation of the savage conflict and the resumption of UN-led ceasefire peace talks.

The time is now to force the Saud-led coalition and factions as well as their western backers into compliance with international humanitarian law and accountability. For the Security Council, this means being more consistent in how it fully addresses protection concerns, civilian lives and livelihoods. Its prompt decisions are needed now and not tomorrow, as they are crucial for statewide peace, security and civilian protection.