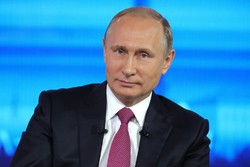 Russia’s President Vladimir Putin warns that a US military attack against Iran would be catastrophic as tensions mount between Washington and Tehran.

RNA - Speaking on Thursday during a televised call-in show, Putin said potential US military action against Iran would be a “catastrophe for the region as a minimum.”

He added that it would trigger an escalation of hostilities with unpredictable results.

The United States has been escalating tensions with Iran under President Donald Trump. Leading a signature policy of  “maximum pressure,” the US quit a UN-ratified nuclear agreement between Iran and six world powers. It then proceeded to restore the sanctions that had been lifted under the deal.

Putin, however, reminded that Tehran was in full compliance with the agreement -- something that has been verified by the UN nuclear agency -- the International Atomic Energy Agency -- in 15 reports. The Russian head of state also called the sanctions against Iran “unreasonable.”

Washington has, in addition, sent an aircraft carrier strike group, a bomber task force, an amphibious assault ship, and some 1,500 more forces to the region.

The US has cited, what it calls, alleged intention by Iran to target the American interests in the region for the alarming escalation. Tehran has rejected harboring any such malevolence, warning that the region cannot take another conflict as a result of Washington’s reckless measures.

Earlier on Thursday, the Islamic Revolution Guards Corps (IRGC), Iran’s elite defense forces, said they had shot down an intruding American spy drone in the country’s southern coastal province of Hormozgan. The IRGC specified the aircraft as a US-made Global Hawk surveillance UAV, saying it was brought down by its Air Force after violating the Iranian airspace.

Subsequently, Iran’s Foreign Ministry sharply condemned the United States for the violation, warning that the aggressors bear the responsibility for repercussions of such “provocative” moves.

Putin’s warning was also echoed by Russian Deputy Foreign Minister Sergey Ryabkov, who asked Washington to stop the buildup “before it’s too late” or the situation would spiral out of control.

“We have no doubts that the US political and military leadership is not stopping at any actions whatsoever in order to maximally complicate the situation and, most importantly, increase pressure on Iran,” he told Russia’s TASS news agency.

A new conflict, however, is "completely inadmissible, considering the grave consequences of such a scenario," Ryabkov added.