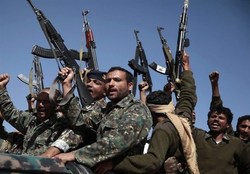 Saudi Arabian officials have been forced to suspend air traffic at an airport in the Southern province of Jizan following yet another major drone attack by Yemeni resistance forces in retaliation for the kingdom's ongoing war against the impoverished country.

He also pointed that Yemeni ballistic missiles, cruise missiles and drones are able to hit any targets in Saudi Arabia and that strikes will not be limited to Najran, Jizan and Asir which are closer to Yemeni territories.

He warned the Riyadh regime that Yemen was going to broaden its "deterrence area".

Saree also stated that Yemen's "full right and legitimacy" in responding to the aggression.

The general also confirmed that Yemen had the ability to continuously manufacture missiles and drones for the years to come despite an aerial and maritime blockade by Saudi Arabia and its allies.

The Houthi Ansarullah movement has so far carried out several high-profile drone and missile attacks against vital targets across Saudi Arabia, successfully bypassing the advanced air defenses of the kingdom which are mostly provided by the US.

The Yemenis' attacks against major Saudi facilities and infrastructure have intensified in recent weeks.

In mid-May, Yemeni soldiers, backed by allied fighters from Popular Committees, launched a major operation against the strategic oil facility in Saudi Arabia in retaliation for the Riyadh regime’s devastating military aggression and siege of the impoverished country. Following the attack, Saudi Arabia stopped pumping crude oil on the major pipeline across the country. The retaliatory attack also led to the rise of oil prices and fall of stock markets in Persian Gulf Arab countries.

The attack bears extra significance at this stage of the war because the Yemeni forces could fly armed drones so far and carry out precision strikes and then fly them back while evading all Saudi defenses on the way. The long-range drones open unlimited possibilities for Yemeni resistance forces, which have already surpassed all expectations by surviving the massive Saudi onslaught and mounted a potent response with an arsenal of ballistic missiles.

Yemen's Ansarullah movement has also warned that its recent attack on a major Saudi oil facility was the start of operations against 300 vital targets in Saudi Arabia and the UAE.

The Ansarullah said its drone attack on pumping stations of the Saudi state oil company Aramco was the start of operations against 300 vital targets. The group added that other planned targets include military headquarters and facilities in Saudi Arabia and the United Arab Emirates.