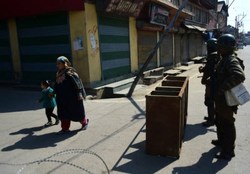 Amnesty International has censured the Public Safety Act (PSA) in Indian-controlled Kashmir as a "lawless law" that violates national and global justice and fuels tensions in the restive region.

RNA - Amnesty said in a report released on Wednesday that the PSA was a breach of international human rights laws, adding that it "circumvents the criminal justice system in Jammu and Kashmir to undermine accountability, transparency and respect for human rights."

Thousands of people have been detained under the Public Safety Act (PSA), which allows imprisonment for up to two years without trial or charge, since the eruption of anti-India Insurgency three decades ago.

"This act is contributing to inflaming tensions between the state authorities and local populace and must be immediately repealed," Aakar Patel, the head of the Indian chapter of the London-based rights organization, said.

Amnesty’s new report is based on the analysis of 210 cases of detention under the act between 2012 and 2018.

The group found that most of the detainees faced both PSA detentions and criminal proceedings in parallel on the basis of the same or similar allegations.

Amnesty referred to the detention of prominent activist Masarat Alam for a cumulative period of 20 years since 1990, despite never being charged with a crime.

"The police appear to use the PSA as a safety net, using it to secure the detention of suspects who are released, or likely to be released, on bail," Zahoor Wani, who led the research, said.

Indian troops are in constant clashes with armed groups seeking Kashmir’s independence or its merger with Pakistan.

India regularly accuses Pakistan of arming and training militants and allowing them cross the restive frontier in an attempt to launch attacks. Pakistan strongly denies the allegation.