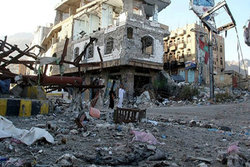 Saudi Arabia has launched new airstrikes on Yemen's capital and the northwestern province of Hajjah after the Houthis called for “serious talks" to reach a peace agreement.

The Saudi warplanes also conducted air raids on the city of Harad in the province of Hajjah on Friday, al-Masirah said.

There were no immediate reports on possible casualties as a result of the air raids.

Saudi Arabia launched a devastating campaign against Yemen in March 2015, with the goal of bringing the government of former Yemeni president Abd Rabbuh Mansur Hadi back to power and crushing the Houthi movement.

The US-based Armed Conflict Location and Event Data Project (ACLED), a nonprofit conflict-research organization, estimates that the Saudi war has claimed the lives of over 60,000 Yemenis since January 2016.

Yemen’s army and allied popular committees have carried out various attacks on Saudi positions in retaliation for the kingdom’s fatal aggression against their country.

Earlier on Friday, Yemeni Qasif-2K drones targeted an airport in the Saudi province of Asir. The attack was the second on Abha airport in less than a week.

He told the Yemeni News Agency (Saba) that the aggressors have committed crimes in Yemen for years as the international law has not been applied.

“When the international law slept five years,… the criminals became bold in their aggression,” he said.