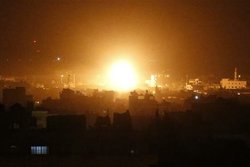 Israel says its warplanes have launched a new airstrike against a position of the Palestinian resistance movement Hamas in the besieged Gaza Strip, after the regime allegedly intercepted a rocket fired from the enclave into the Israeli-occupied territories.

RNA - The Israeli military said in a Twitter post that the airstrike had been conducted in the early hours of Thursday against an “underground network” located at a “military compound of Hamas in the southern Gaza Strip.”

It was not clear whether the strike had caused any damage or casualties.

The statement said the airstrike had been in response to a rocket purportedly fired from Gaza toward the Israeli-occupied territories late Wednesday, claiming that the projectile had been intercepted.

In early May, Israel and Hamas reached a truce agreement after exchanges of fire during which Israel heavily bombarded the blockaded sliver and hundreds of rockets were fired from the enclave at Israel, the largest outbreak of violence since the 2014 Gaza war.

The Thursday strike came shortly after Israel tightened fishing restrictions against the Gaza Strip, claiming that a barrage of incendiary balloons had been launched from the coastal enclave.

“Due to the continuous launching of incendiary balloons and kites from the Gaza Strip towards Israel, it has been decided tonight (Wednesday) not to allow access to Gaza’s maritime space until further notice,” said a spokesperson for COGAT, a unit of Israel's ministry of military affairs, in a statement.

COGAT had said a day earlier that it had reduced the extent of the fishing zone from 10 nautical miles offshore to six. A week before that, it had reduced it from 15 to 10.

Under the Oslo Accords signed in 1993, Israel is obligated to permit fishing up to 20 nautical miles, but it has never implemented that obligation.

Israel maintains a heavy naval presence off the coast of the impoverished Palestinian enclave, severely affecting the livelihood of some 4,000 fishermen and at least 1,500 more people involved in the fishing industry.

Over the past few years, Israeli forces have carried out more than a hundred attacks on Palestinian boats, arresting dozens of fishermen and confiscating several boats.

According to a report by the Israeli Information Center for Human Rights in the Occupied Territories on Wednesday, the Israeli military forces “deliberately” targeted residential buildings in the Gaza Strip on May 3-6 this year.

“Israel launched airstrikes and fired shells at more than 350 targets in Gaza, injuring 153 people and killing 25 — including 13” civilians, the NGO said.

It added that there had been two minors — a three-month-old baby girl and an 11-year-old boy — and three women, one of them pregnant, among the victims.

“These strikes are part of a policy formulated by” Israeli “officials and the senior military command,” the report further said.

The Gaza Strip has been under an Israeli blockade since June 2007. The blockade has caused a decline in the standard of living as well as unprecedented levels of unemployment and poverty.

Palestinians have held weekly rallies along the Gaza border to protest the siege on the enclave and demand the right to return of those Palestinians displaced by Israeli aggression since 1948.