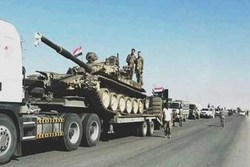 The Damascus Army continued to dispatch massive military convoys to Northern Hama and Southern Idlib as heavy fighting was underway between the two sides and left tens of casualties on the terrorists.

RNA - A military convoy comprising hundreds of Syrian soldiers and massive military equipment were dispatched from Hama Airport to contact lines with terrorists in Northern and Northwestern Hama as well as Southern Idlib to reinforce the Syrian Army's military positions in those regions.

A military convoy comprising hundreds of Syrian soldiers and massive military equipment were dispatched from Hama Airport to contact lines with terrorists in Northern and Northwestern Hama as well as Southern Idlib to reinforce the Syrian Army's military positions in those regions.

The Arabic-language al-Watan newspaper reported that the Syrian Army's artillery units and air force as well as the Russian air force pounded the terrorists' military positions and movements in all fronts in Northwestern Hama and Southern Idlib, including the towns of Kafar Zita, Mourek and al-Latamaneh, destroying all their military positions and killing tens of terrorists.

Some seven Turkish Army soldiers and Ankara-backed militants were killed and ten others were wounded in several military operations by Kurdish militias in Afrin and Izaz in Northern Aleppo over the past two days.

The Kurdish-language Hawar News Website reported that Afrin Liberation Forces attacked a deployment center of the Turkish Army in the village of Marimin in Shara region, killing two Turkish soldiers and injuring five others.

The source noted that these forces also targeted a military position of Jbahat al-Shamia in the village of Filat al-Qazi in Shara region, killing four of them and injuring two others.

The Kurdish fighters also attacked a military position of Ahrar al-Sham in the town of Alabeh in Izaz region in Northwestern Aleppo and killed one terrorist and injured three others.

The US and Syrian Democratic Forces (SDF) attacked the residents of two towns in Eastern Deir Ezzur after they held protest rallies and hoisted the Syrian flag, demanding expulsion of the occupying forces.

A group of SDF fighters backed by the US-led coalition air force attacked civilians in two towns of Abu al-Nitel and al-Namileh in Eastern Deir Ezzur who while hoisting the Syrian Army were calling for SDF and the US occupying forces to be expelled from Syria, local sources in Deir Ezzur said.

According to Fars News Agancy, the sources noted that two civilians were killed and wounded in SDF and US attack, and said that the entire regions under the SDF control in Hasaka and Deir Ezzur provinces were the scenes of popular protests against the presence of occupying forces there.

Meantime, the Arabic-language al-Khabour News Website reported that the SDF in Hasaka province prevented civilians from leaving the regions under their control for safe regions controlled by the Syrian Army.

The SDF fighters also asked for the payment of a sum of about 100,000 Syrian liras from any vehicle trying to leave the SDF-controlled region for Hasaka.

The Arabic-language website of the Russian Sputnik news agency, meantime, reported that a military convoy of the US-backed militants came under attack by unknown assailants in the town of Abu Suseh in the Northern part of Raqqa city which killed four US-backed militants and injured nine others and also destroyed four of their military vehicles.