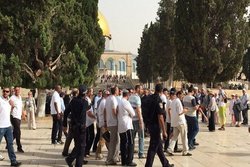 The Permanent Secretariat of the International Conference on Supporting Palestinian Intifada in a statement on the occasion of the global Quds Day rallies underlined that the Arab states remained safe from an Israeli occupation thanks to the resistance groups' fight against the regime.

RNA - "Had the Resistance Movement failed to pin down the Zionist regime, they would have invaded other lands, including Egypt, Jordan, Iraq and Persian Gulf littoral states," the statement said on Wednesday.

It added that the world freedom seekers will attend Quds Day rallies on the last Friday of the holy month of Ramadan to pay homage to the ideals of late Imam Khomeini to liberate the holy Quds and occupied lands.

Meantime, representative of the Iranian Jewish community at the parliament Siamak Mareh Sedq underlined Jews' participation in the International Quds Day rallies on Friday, saying that the Palestinian nation will soon be liberated from the occupation of Israel.

"Jewish Iranians consider participation in Quds Day rallies as a national and religious responsibility… all walks of the honorable Iranian nation obey the orders of Supreme Leader of the Islamic Revolution (Ayatollah Seyed Ali Khamenei) and will shout slogans against the US and Israeli occupiers in a united and integrated manner," Mareh Sedq said in a statement on Thursday.

He added that full liberation of Quds and Palestine is close, noting that the resistance front will soon celebrate its victory.

Mareh Sedq called on all monotheists, specially the Jewish people, across the world to participate in the International Quds Day rallies in their countries to show opposition to Zionism.