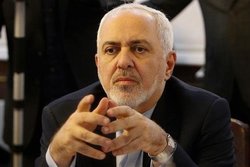 Iranian Foreign Minister Mohammad Javad Zarif says the holy occupied city of Jerusalem al-Quds belongs to Palestine and the Palestinian nation, stressing that neither the United States nor the Israeli regime can make decisions about it.

RNA - “Al-Quds (Jerusalem) is neither America's to give away nor Israel's to take. And NOT for brutal accomplices to try to buy. Quds belongs to Palestine & Palestinians: history shows that whomever ignores this is condemned to ignominious failure,” the top Iranian diplomat said in a post published on his official Twitter page on Wednesday.

Al-Quds (Jerusalem) is neither America's to give away nor Israel's to take. And NOT for brutal accomplices to try to buy.
Quds belongs to Palestine & Palestinians: history shows that whomever ignores this is condemned to ignominious failure.
Iran stands with Palestine. #QudsDay

Zarif reaffirmed Tehran’s full support for the Palestinian cause, calling for mass participation in International Quds Day rallies on Friday.

International Quds Day is a legacy of the late founder of the Islamic Republic, Imam Khomeini, who designated the day in solidarity with Palestinians.

Since the 1979 Islamic Revolution in Iran, International Quds Day has been held worldwide on the last Friday of the Muslim fasting month of Ramadan.

Meanwhile, the Palestinian Hamas resistance movement has called upon Muslim heads of state and leaders participating in the upcoming 14th summit of the Organization of Islamic Cooperation (OIC) in the Saudi city of Mecca to support the Palestinian nation, and adopt appropriate and effective measures aimed at protecting al-Quds.

Ismail Haniyeh, the head of the Hamas political bureau, said in a statement on Wednesday that the OIC session comes at a time when “the Palestinian issue is facing challenges, which threaten its present, future and existence. It is being held when Israeli terrorism against Palestinian land and people is on the rise.”

He pointed out that the American team -- comprised of President Donald Trump's senior adviser and son-in-law Jared Kushner, Middle East envoy Jason Greenblatt, and US ambassador to the occupied territories David Friedman --“plays a suspicious role in supporting and promoting political and economic schemes aimed at liquidating the Palestinian cause and undermining Palestinians’ rights.”

Haniyeh then stressed “the need for an effective and urgent Islamic action” that would protect the occupied city of al-Quds, al-Aqsa Mosque, stand against the Israeli regime’s policy of criminal and racist occupation, and would put an end to its plots of “Judaization, division and displacement.”

The senior Hamas official finally demanded the final communiqué of the OIC summit, which is scheduled to take place on May 31, to be a unified Muslim stance aimed at building a roadmap towards achieving the aspirations of the Palestinian nation, which is the liberation of their homeland and return to it.