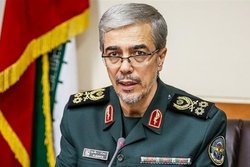 Chief of Staff of the Iranian Armed Forces Major General Mohammad Hossein Baqeri blasted the US-sponsored 'Deal of the Century' plan, saying that the International Quds Day rallies will foil all plots against the Palestinians.

RNA - Undoubtedly, this year’s Quds Day will be turned into a huge and glamorous renewal of allegiance to the sublime cause of Palestine, support for the oppressed people of Palestine and condemnation of the occupying, fake and child-killing regime of Israel and its allies, General Baqeri said in a statement on Wednesday.

He added that the rallies will shatter the illusion of the US in imposing the already-failed 'Deal of th Century' and destroying Palestine like its other dreams, including 'the Greater Middle East' and 'Israel from the Nile to the Euphrates'.

Similar to the past 40 years, the Iranian nation will massively take part in the Quds Day rallies to demonstrate that the cause of Palestine is not destructible and the true promise of God will be fulfilled by ending the Zionist regime and liberation of the occupied lands, General Baqeri underlined.

According to Fars News Agancy, the International Quds Day is an annual event opposing Israel's occupation of Beitul-Muqaddas. Anti-Zionist rallies and demonstrations are held on the last Friday of Ramadan in Muslim and Arab countries around the world, specially in Iran, as well as a large number of non-Muslim states.