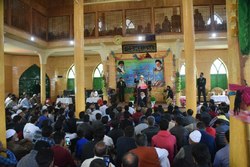 Rasa – The youth of Suthsoo Kalan in Indian-controlled Kashmir ‎held a conference on ‎Mahdism and raised money for the flood victims in Iran.‎

RNA – In an exclusive report for Rasa News Agency, Saif Ali Budgami, a Kashmiri ‎revolutionary student, said that the youth of Suthsoo Kalan in Budgam District, Indian-‎controlled Kashmir organized Imam al-Mahdi Conference at Nour-e Zahra Husayniyah on May ‎‎5th in which hundreds of revolutionary followers from every age group, including women, ‎participated in an enthusiastic manner. ‎
‎ ‎
The conference was organized by the youth of the village. For the last four years, they have ‎been arranging this conference on an annual basis by collecting donations from the general ‎public of the village.‎
‎ ‎
The conference attracts hundreds of followers from every corner of the Kashmir Valley. The ‎most inspiring glimpse of the conference was the gathering of the reputed and renowned ‎Islamic Shi’ah and Sunni scholars of the valley under the umbrella of Mahdism.‎
‎ ‎
The conference was well-organized, well-planned and well-disciplined.‎

On this auspicious occasion, the renowned Islamic scholars spoke about different aspects of ‎Mahdism and stressed the objectives, need and implications of the concept of Mahdism in ‎the current era. ‎

In addition, the essence of unity among Muslims was part of every scholar’s speech.‎
‎ ‎
The scholars raised their voices against the hegemonic systems of the world and ‎demonstrated their support for the oppressed people of the world.‎
‎ ‎
Mawlana Mir Mustafa, one of the organizing head of the conference, said, “The main ‎motivation of this esteemed conference was to make the people aware and prepared for the ‎reappearance of Imam al-Mahdi and attract the youth towards the culture of revolution by ‎instilling the idea of Mahdism in them.”‎
‎ ‎
Many revolutionary youth shared their views about the conference. ‎

Asif Ali, a local volunteer, stated, “If the people understand the depth of the concept of ‎Mahdism, they can surely rule the whole world in every aspect. Thus, our motivation is to ‎make the people aware of the necessity of Mahdism.”‎
‎ ‎
Neesha Jan, a female volunteer, added, “We need to establish such platforms and arrange ‎such conferences to spread the real concept of Mahdism to liberate ourselves from the ‎hegemonic powers of the world.”‎
‎ ‎
The youth who participated in the conference had organised a donation drive for the recent ‎flood victims of Iran which affected many provinces of Islamic Republic of Iran and left ‎more than 70 dead and thousands more without food and homes.‎

People from different areas donated money and belongings for the flood victims. ‎

The conference was culminated with the recitation of Du’a al-Faraj and special prayers for ‎the flood victims and the oppressed Muslim people.