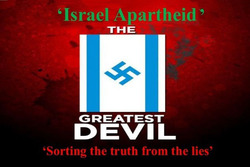 The Israeli Foreign Ministry has called in the French ambassador to the occupied territories to protest comments made by Paris’ outgoing envoy to the United States after he said the Tel Aviv regime’s occupation of the West Bank amounts to “apartheid.”

RNA - The ministry’s spokesman Emmanuel Nahshon said in a statement on Tuesday that Hélène le Gal had been summoned for “a verbal reprimand” over comments made earlier in the week by Gérard Araud in which he declared Israel an “apartheid state.”

In an April 19 interview with The Atlantic magazine, Araud said Israel was “extremely comfortable” with the status quo “because they [can] have the cake and eat it. They have the West Bank, but at the same time they don’t have to make the painful decision about the Palestinians, really making them really, totally stateless or making them citizens of Israel.

“They won’t make them citizens of Israel. So they will have to make it official, which is we know the situation, which is an apartheid. There will be officially an apartheid state. They are in fact already,” the outgoing French ambassador to the United States noted.

Araud also pointed to the US President Donald Trump’s controversial proposal for peace between the Israelis and Palestinians, dubbed “the deal of the century,” stressing that the plan will be “very close to what the Israelis want,” and is 99 percent “doomed to fail.”

The French diplomat went on to say that Trump’s son-in-law and adviser Jared Kushner “doesn’t know the history” of the Israeli-Palestinian conflict,” noting, “He may neglect the point that if you offer the Palestinians the choice between surrendering and committing suicide, they may decide the latter. Somebody like Kushner doesn’t understand that.”