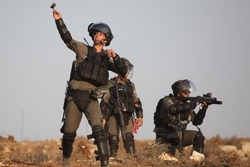 Palestinian detainee Omar Younis was proclaimed dead on Saturday in an Israeli hospital after he succumbed to serious bullet injuries he sustained about a week ago at Za’atara checkpoint, South of Nablus, in the occupied West Bank.

Younis suffered a bullet injury last Saturday, after Israeli soldiers opened fire at him at Za’atara checkpoint on allegations that he tried to carry out a stabbing attack.

During his presence in the hospital, the Israeli occupation army held military trials in absentia for him and extended his detention without allowing his family or any lawyer to visit him.