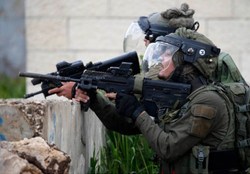 Israeli military forces have shot and injured a Palestinian man in the northern part of the West Bank as tensions continue in the occupied Palestinian territories.

RNA - Israeli media outlets alleged that the unidentified Palestinian fired toward Israeli soldiers near the town of Arrabah, located 13 kilometers southwest of Jenin.

In response, Israeli soldiers fired at the man, who was injured in the back.

Medical responders who arrived at the scene said the man was in moderate condition, and was transferred to a hospital to receive medical care. No Israeli troops were injured in the purported attack.

The Israeli army later said in a statement that a second suspect was also involved in the incident.

“The soldiers are searching the area and carrying out a manhunt to apprehend him,” the statement added.

Tensions continue in the occupied Palestinian territories as part of the aftermath of US President Donald Trump's recognition of Jerusalem al-Quds as Israel’s capital in December 2017 and the relocation of the US embassy to the occupied city in May 2018.

On December 21, 2017, the United Nations General Assembly overwhelmingly voted in favor of a resolution that called on the United States to withdraw its controversial recognition of Jerusalem al-Quds as Israeli “capital.”

Israel, however, rejected the world body’s resolution while thanking Trump for his decision to move the US embassy to Jerusalem al-Quds.