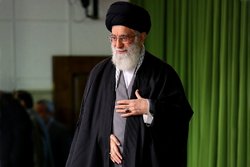 Rasa – According to Ayatollah Khamenei, it’s not permissible to “like” pictures of ‎women without hijab on social networks if it’s considered as confirming and promoting ‎falsehood and sin.‎

RNA – The following are the latest istifta’at (inquiries on religious matters) from Grand ‎Ayatollah Sayyed Ali Khamenei, the Supreme Leader of the Islamic Revolution.‎

Confirming the lack of hijab on social networks

Question: Is it allowed to “like” photos of women without hijab on social ‎networks? What is the ruling if the identity of the woman is not specified or if the ‎person is a non-Muslim?‎

Answer: If it’s considered as confirming and promoting falsehood and sin, it isn’t ‎permissible. ‎

Question: What is the ruling regarding a woman who wears light makeup while ‎wearing a hijab and covering her hair completely? Can a woman wear coloured contact ‎lens which don’t differ much from the (natural) colour of the eye?‎

Answer: That which is considered by custom to be adornment and makeup must be ‎covered in front of non-mahrams (unmarriageable kin).‎

Question: Because of rational reasons, I don’t follow the imam as I don’t consider him ‎to be adil (just) and afterwards, I repeat the prayers (individually). If I am the connection ‎between the imam and those following him, is it obligatory to inform them that I will ‎repeat my prayers?‎

The earnings of a singer and musician ‎

Question: A person whose job is singing at a wedding, while singing along with lahwi ‎music which encourages others to dance, are his earnings problematic?‎
‎(Lahwi music is a sort of music that is common or suitable for frivolous gatherings and ‎carouses.)‎

Answer: If his singing or playing is a haram (forbidden) form of music, it’s not ‎permissible to receive any income for this work.‎

8
8
Answer
Salam alaikum , my question is that playing chess is haram or halal ?please give any answer with reason.
Answers
zishan hyder

3
7
Answer
Is Mourning of the chest is halal?if yes then please explain it for my sunni friends.
Please type in your comments in English.
The comments that contain insults or libel to individuals, ethnicities, or contradictions with the laws of the country and religious teachings will not be disclosed