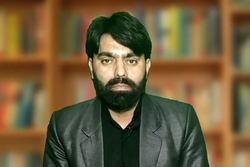 RNA – In an exclusive interview with Rasa News Agency, Sayyed Karar Hashmi, a Kashmir-‎based seminarian in Qom, lashed foreign media organizations for carrying false and ‎fabricated stories about Iran and its developments. The Iran-China deal has given sleepless ‎nights to all arrogant powers of the world and such deal is basically a 25-year partnership ‎cooperation between Iran and China and is a “conventional agreement” and this ‎comprehensive cooperative agreement, which aims at strengthen relations between the two ‎countries, has not yet been finalized between the two countries.‎

He told that the Iran and China are very close to finalising a 25-year strategic partnership ‎which will include Chinese involvement in Chabahar’s duty-free zone, a nearby oil refinery, ‎and possibly a larger role in the Chabahar port as well. Beijing hopes to get cheap oil in ‎return. China will walk away with a steady supply of Iranian oil at a heavily discounted rate ‎for 25 years. The deal also has a military dimension. There will reportedly be joint training ‎and exercises, joint research and weapons development, even intelligence sharing as part of ‎the agreement. Such developments have made the American stance on world hegemony ‎irrelevant now. ‎

Sayyed Hashmi said that it is worth noting that the United States’ “maximum pressure” policy ‎against Tehran has failed completely. China went under the nose of the Americans and ‎managed to negotiate a deal with Tehran. The project has also received the support of ‎Iran’s highest authority, the Supreme Leader of the Islamic Revolution, Ayatollah Sayyed Ali ‎Khamenei, saying that the agreement between the two sides was “wise.” It seems that no ‎power on earth could stop this deal as it has received the green light from the highest ‎authority of Iran. Trump should be prepared to face bad to worse days ahead. ‎

He further added that if the Iran-China agreement is implemented, it would revive Iran’s ‎economy and stabilise its politics. Such an economic and political recovery would improve ‎Iran’s regional position. The 25-year plan is based on a win-win approach which heralds long ‎term cooperation.‎

Sayyed Hashmi said that the advantage for Iran, if China lives up to its commitments, is the ‎infusion of a significant amount of cash into its economy. Such an infusion would certainly ‎help revive Iran’s economy and create more jobs and make Islamic Republic of Iran strong ‎in every sense. ‎