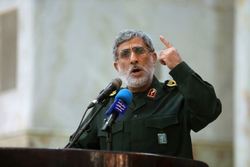 The commander of the Qods Force of the IRGC stated that what has happened in the United ‎States today, especially with the wasp-class amphibious assault ship, is the result of the ‎actions, behaviour and crimes of the American government and said, “The United States and ‎the Zionist regime are facing very difficult days.”‎

RNA – Speaking to a group of commanders of the Islamic Resistance in response to the fire ‎onboard the American ship USS Bonhomme Richard, General Esmail Qaani, the Commander ‎of the Qods Force of the Islamic Revolutionary Guard Corps (IRGC), stated, “What has ‎happened in the United States today, especially with the wasp-class amphibious assault ship, ‎is the result of the actions, behaviour and crimes of the American government and it is a ‎divine promise that anyone who commits a crime will be punished by God. Because they ‎changed the word of God and oppressed and committed crimes, they were caught in divine ‎wrath and punishment.”‎

He stressed, “The Americans shouldn’t unjustifiably look for the culprit and blame others. ‎This is the fire they lit themselves and today, this fire has engulfed them. We must tell them ‎that this is the answer to your crimes committed by your own elements, God will punish you ‎with your own hands.”‎

General Qaani reminded the American government, “Your happy days are still very hard days ‎and difficult events are ahead of you and the Zionist regime.‎

He said, “The fact is that the American military is tired and worn out and its equipment is ‎broken. American Navy commanders have long said the ships are nothing more than scrap ‎metal. The United States must accept its bad situation and not oppress humanity and its ‎people any more.”‎

On July 12, an explosion occurred about 8,50 a.m. aboard the USS Bonhomme Richard while ‎in its home port at Naval Base San Diego and while it was undergoing maintenance. The ‎resulting fire was fueled by paper, cloth, rags or other materials, not fuel oil or other ‎hazardous materials, Rear Admiral Philip Sobeck, commander of Expeditionary Strike Group ‎‎3, told reporters that evening.‎