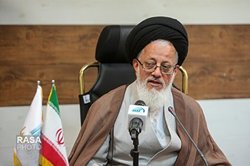 Ayatollah Hoseyni said that the United States is trying to create corruption in Iraq, and to ‎place itself as the saviour of the Iraqi people, and to outwardly reform things in a way that it ‎can still rule over Iraq. However, the United States was unaware that the ultimate destiny of ‎the people was determined by God.‎

RNA – During a visit to Rasa News Agency’s International Affairs Office, Ayatollah Sayyed ‎Mojtaba Hoseyni, the representative of the Supreme Leader of the Islamic Revolution ‎‎[Ayatollah Khamenei] in Iraq, discussed important issues related to the United States military ‎and cultural presence in Iraq, the activities of the Islamic seminaries of Najaf and the ‎presence of Iranian seminarians and foreigners in these Islamic seminaries.‎

Regarding the current situation in Iraq, the Iranian scholar said, “One of the current crises ‎affecting Iraq is the political crisis. After its liberation from the yoke of the Ba’ath Party, this ‎country was ensnared by the United States which occupied it and appointed dependent rulers ‎and, in this manner, it took control of this country and deprived the Iraqi people of their ‎destiny. The United States is blocking reforms, and is now trying to create divisions between ‎the Iraqi and Iranian peoples and to take advantage of the situation while promoting ‎religious bigotry.”‎

He emphasized that the Iraqi people have friendly and close relations with the Islamic ‎Republic and noted, “In particular, 95% of the Islamic Resistance groups in this country ‎support the positions of Iran and the Supreme Leader, and all members of these groups, ‎both those who imitate him and those who imitate other sources of emulation, have a close ‎relationship with the Supreme Leader and in short, the Iraqi people have more insight than in ‎the past.”‎

Ayatollah Hoseyni said that the United States has waged sectarian wars since the beginning ‎of the occupation of Iraq and added, “The issue of Daesh is one of the recent sectarian ‎divisions that the United States has created among the Iraqi people in various regions to ‎discourage Iraqis from stabilizing their country and resort to the United States. The United ‎States is trying to create corruption in Iraq, and to place itself as the saviour of the Iraqi ‎people, and to outwardly reform things in a way that it can still rule over Iraq. However, the ‎United States was unaware that the ultimate destiny of the people was determined by God, ‎and that was why the Iraqi people, both Shi’ahs and Sunnis, gradually realized the United ‎States’ true colours and those who objected to my speeches criticizing the country, realized ‎that not only did the United States not want to save them from the Ba’athists, but rather ‎they were the basis of evil and instability in Iraq.” ‎

His Eminence added, “The United States has focused all its efforts on dividing Iraq and ‎creating dissension among the Iraqi people, and in addition to dividing Shi’ahs and Sunnis, it ‎is also dividing Shi’ahs themselves and Iraqi fighters and promoting partisanship. On this ‎basis, we see that many parties are competing in the Iraqi elections, and through the ‎promotion of the federal system, they are trying to exclude the people and deprive them of ‎the right to self-determination. Thus, according to the nature of partisanship, party ‎prejudices replace the interests of the nation.” ‎

Ayatollah Hoseyni noted, “Currently, the seminaries of Najaf are operating in the traditional ‎style of the seminaries of Iran and Iranian and foreign seminarians from different countries ‎of the world study together, which has its advantages and disadvantages. Among the ‎benefits of this is the fertilization of talents, and those who have a good ability for progress ‎can grow and have a variety of learning skills. As a result, a student in the seminary of Najaf ‎can experience an international atmosphere, and this is in contrast to the seminaries of Iran, ‎where Iranian and foreign seminarians have little to do with each other. Among the ‎disadvantages of this issue are the activities of enemy infiltrators among seminarians.”‎