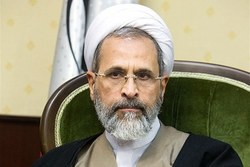 An international congress featuring the holy city of al-Quds (Jerusalem) will be held on ‎May 17-18.‎

RNA – An international congress featuring the holy city of al-Quds (Jerusalem) will be held on ‎May 17-18.‎

Ayatollah Alireza Arafi, the president of the al-Quds International Congress, said in a press ‎conference on Saturday that it will be organized online due to the Coronavirus concerns.‎

He added that thinkers, scholars and political figures from 18 countries will deliver speeches ‎at the international event.‎

Describing al-Quds and al-Aqsa Mosque as the symbols of Islam and Islamic civilization, he ‎stressed that defending al-Quds is upon all Muslims and is linked with the national interests of ‎all Islamic nations.‎

The cleric also noted that International al-Quds Day ceremonies will be held in Iran and other ‎countries while observing the health protocols.‎

He said that based on a decision made by the National Headquarters to Fight the ‎Coronavirus in Iran, the ceremonies in cities where the Coronavirus threat level is still high, ‎like in Tehran, people will hold rallies in cars.‎

Elsewhere in his remarks, Ayatollah Arafi slammed certain regional countries who have ‎supported the so-called deal of century plan proposed by the US, stressing that the US plot ‎is doomed to failure.‎

The International al-Quds Day is a legacy of the late founder of the Islamic Republic, Imam ‎Khomeini, who designated the day in solidarity with Palestinians.‎

Since the 1979 Islamic Revolution in Iran, the International al-Quds Day has been held ‎worldwide on the last Friday of the Muslim fasting month of Ramadhan.‎

This year, the International al-Quds Day falls on Friday, May 22.‎